Kirkland continued with his virtuosic watercolors for yet a third period of five of his career, although he began the conversion to oil with the landmark paintings of Near Evans Ranch (1947, Surreal), Red Rocks (1947, Surreal), Mountain and Lake in Moonlight (1947, Designed Realism) and Mountain Rhythms (1948, Hard Edge Abstraction). These four paintings within a year of each other are in three different styles: Designed Realism, Surrealism and Hard Edge Abstraction. The latter painting was in the highly controversial Denver exhibition 15 Colorado Artists, given at the Denver Art Museum (then located at Chappell House), when Kirkland and nine of his University of Denver Art Department faculty and five other artists broke with the conservative Denver Artists Guild and gave dueling shows in two different exhibition rooms, across from each other, in December 1948. While doing many surrealist paintings during much of the time of this third period, Kirkland did his first referential abstractions in watercolor. And from 1950 to 1955, Kirkland developed his identifiable Timberline Abstraction series using oil paint. Fantastic Flowers for Mary and Myron 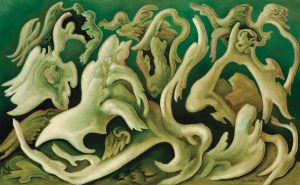