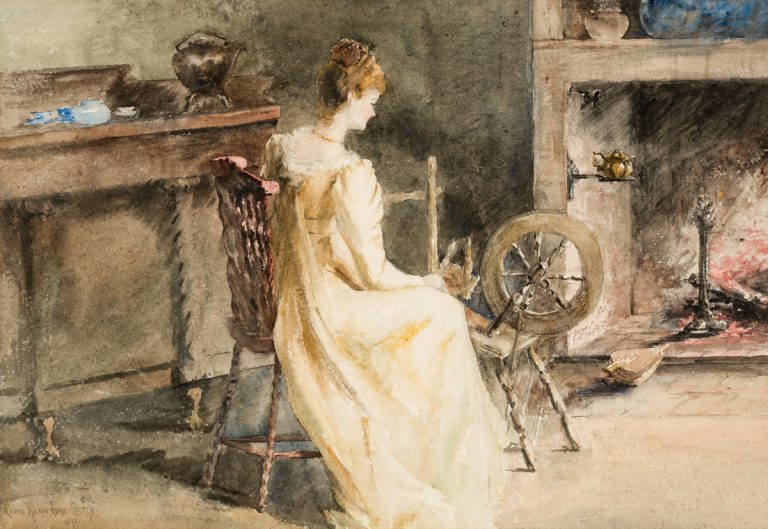 The eldest of four children, Emma Richardson was born on February 28, 1859 in Aurora, Illinois. She began her artistic training at the Art Institute of Chicago. From 1882 to 1883 she attended the Art Students League in New York where she studied with William Merritt Chase, George de Forest Brush and Kenyon Cox. She thereafter studied in Paris at the Academies Julian and Delecluse and Merson, also visiting Italy where she studied with Vettore Zanetti-Zilla and Vincente Poveda y Juan. After returning from Europe, she taught art at the University of Nebraska at Lincoln where she met and married her husband, Dillon Brook Cherry, an oil broker. In 1888 they moved to Denver and three years later she worked with Harriet Winslow Hayden to establish the Le Brun Club. Colorado’s first all-female art group, the club sought greater recognition and exhibition opportunities for Denver’s women artists. In 1893 Cherry hosted in her studio the organizational meeting of the Denver Artists’ Club that later became the Denver Art Association (1917) and then the Denver Art Museum (1923). In 1895 she and her husband moved to Houston, Texas where five years later she helped to found the Houston Public Art League, later the Houston Art League and in 1924 The Museum of Fine Arts, Houston. In the 1920s Cherry was a member of the avant-garde Société Anonyme founded in New York by Katherine Dreier, Man Ray and Marcel Duchamp. Cherry continued to paint in her Houston home until a few weeks before her death at the age of 93.