The first of Kirkland’s three unique textures and the first of his two resist techniques occurred as he was doing his last watercolors (1950-1953). He found that combining watercolor with denatured alcohol gave him unusual textures because the two liquids resist mixing, forming variegated, mottled patterns. (Neither isopropyl alcohol nor ethyl alcohol will produce a resist effect.) He returned to these mixtures in 1962, creating 14 works on paper using variously oil paint, water, ink wash, denatured alcohol, silver and bronze.

One of Kirkland’s two greatest breakthroughs (along with the dots in 1963) was achieved in 1953 when he developed his second resist technique of mixing oil paint and water together. As the water bubbles dried, this gave him painting surfaces unlike any abstract expressionist with textures resembling a moon’s cratered surface. To accomplish this, Kirkland would place a painting flat on his worktable and pour mixtures of oil paint and water onto the canvas. He would guide the liquid in different directions, sometimes blotting the mixtures with paper towels and drawing water off, sensing when to do this within split seconds. In this 15-year period, Kirkland developed four principal series: Pure Abstractions, Nebulae Abstractions, Roman Abstractions and Asian Abstractions. Memorie dell’Alba (Memories of the Dawn) 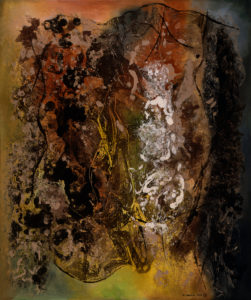