Not content with the extraordinary textures of his oil paint and water mixtures in his fourth painting period, Kirkland went on to develop his third and most pronounced texture for his fifth period. He placed dots onto a canvas with wooden dowels, one at a time. Furthermore, the dots were generally positioned over (and briefly alongside) his oil and water forms, giving a double texture to the paintings. Also, the precise placement of the dots was decided by the somewhat accidental oil paint and water manipulations. So precision was decided by accident, an idea that Kirkland loved. There are four main series and some important sub-series: Energy of Vibrations in Space (with sub-series Valhalla, Geometric, Einstein, Open Suns); Energy of Mysteries in Space; Energy of Explosions in Space; Energy of Forces in Space; and occasionally Pure Abstractions. The Illusion of Floating Mysteries in Red Space The Energy of Explosions of the Sun Sixty Billion Years B.C. The Illusion of Floating Mysteries in Blue Space 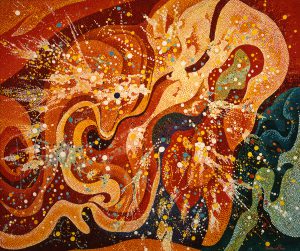 Explosions on a Sun 70 Billion Light Years from Earth 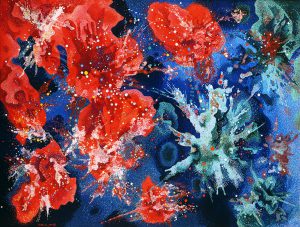 Invasion of Mysteries near Scorpio Explosions on a Sun 80 Billion Light Years from Earth